The only time I want to be the biggest loser...

Hey ya'll! I hope everyone had a good weekend! We had a pretty good weekend here. I got to spend some girl time with my friends Saturday evening and that was a lot of fun. We did some makeup shopping at Sephora. My hubby and his friend watched the kids for me. We have a friend that works there and she showed us some makeup tips. It was so much fun...


Back to my post tho, like I mentioned in my post Monday, me and the hubs decided to join our friends in a "biggest loser" competition. It's been such a good decision for us. We are already pretty competitive people and this has helped our weight loss A LOT! Like I mentioned Monday, I've lost a total so far of 17 pounds and my husband has lost 30. We haven't weighed for about a week so I'm really hoping we lost even more than that.

I know there are a lot of different ways people do the "biggest loser" type of competition. The way we decided to it is splitting into 3 teams. We have 6 people to a team. We all weighed in on the same scale at a friend's house. We decided to take 3 months to compete. We each put in $10 a week. So in the end the group that loses the highest percentage wins the money.

I've never done anything like this before, but it has been so cool. Our friends are all trying to eat healthier and working out. The support has been great. We are all doing different diets. My hubby and I decided to go with the weight watcher diet. We used to go to the meetings and all that before we had kids. We really liked it then. We decided to do it at home using the tools we already had. So we are doing the "old" points system. It works really well for us tho. We found an iphone app that has been so helpful. It's called itrack bites. I think it's only a couple of dollars but it is worth so much more than that.

As far as what we are eating, I've been cooking at home a lot more. That has been an adjustment for me, because I love eating out so much. I had to get over my fear of the kitchen and just start cooking. I've found a lot of good recipes because of it. Here is my favorite I have found so far. It's spinach lasagna rolls I found on a blog. You can find the recipe here. 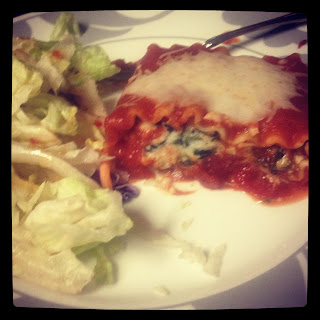 Sorry about the iphone picture! I snapped it in a hurry a couple weeks ago when I made them. Those are only four "old" points each and they were incredible.


The dieting hasn't been too bad! In addition to eating better, me and my husband have been working out. He had physical therapy for his MS a couple months ago and we have been trying to stick to that routine. His physical therapist was so nice and showed me a lot of the work outs that would be good for my husband. Our gym also has a pool that we can do our workouts together in.

I'm really loving this healthier lifestyle. It does make me mad that I didn't do it sooner. It's kind of shocking when I look at the food I was eating before all of this. When I see how many points or calories something is that I used to eat, it makes me sad. But, better late than never right? It's getting easier every day and I love having more energy.


So that's kind of whats going on with us in the dieting/working out department. I plan on writing another post about it when the Biggest Loser competition is over. I took some "before" pictures. If I'm brave enough I will share them when this is all over! :)