Organizing my kids' room - part one

Ok so I just realized I am going to have to split this post into two parts. Why you ask? Well, apparently I got a little camera happy and took about a gazillion pictures of getting rid of clutter and organizing my kids' room. 93 to be exact. And once I narrowed them down a bit I was still left with 23 for the blog. Uh yeah that's a lotta pictures for one post.
And the really sad part about it, some of my pictures turned out horrible! I'm still trying to learn how to take good pictures of rooms and parts of the house. So please forgive my picture quality here! I took the before pictures in a big hurry too so I think they may be the worst.
My kids' have (or I guess you could say had) a crazy amount of toys. It was bad. I've been meaning to get rid of some of them since before I was pregnant with my third. And he is now three months. So this is about a year in the making? For some reason the color in these before pictures look so funky! 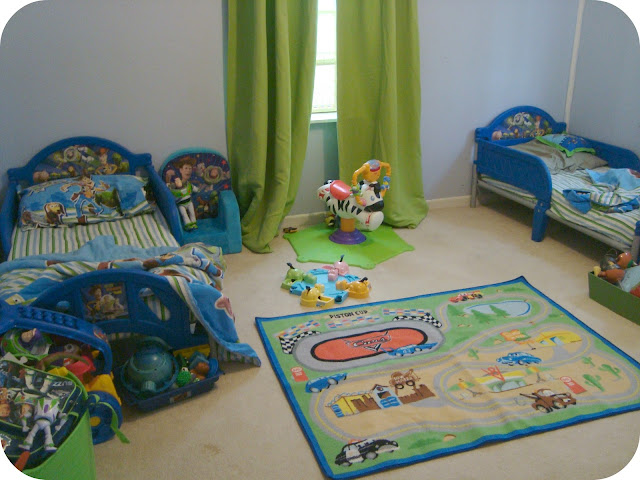 Some of the toys have a lot of pieces and they all got jumbled together with the other pieces of toys, stuffed animals, books, puzzle pieces and all kind of stuff. When we would try to clean it up, instead of separating and putting things together, the toys would all just wind up in a big toy bin or bucket or just anything to hold them. So it was just a big crazy mess. It looks so embarrassing! 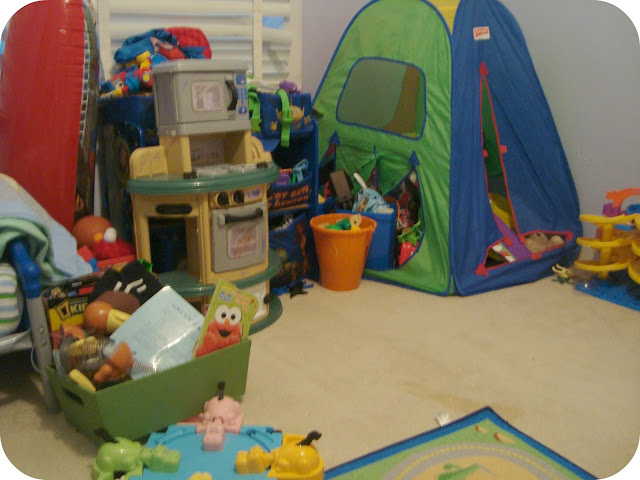 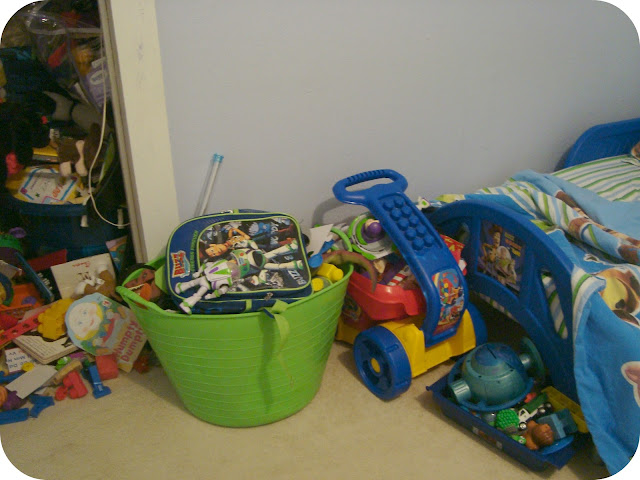 My first step was to make "piles" of toys and start sorting them. This took a while. 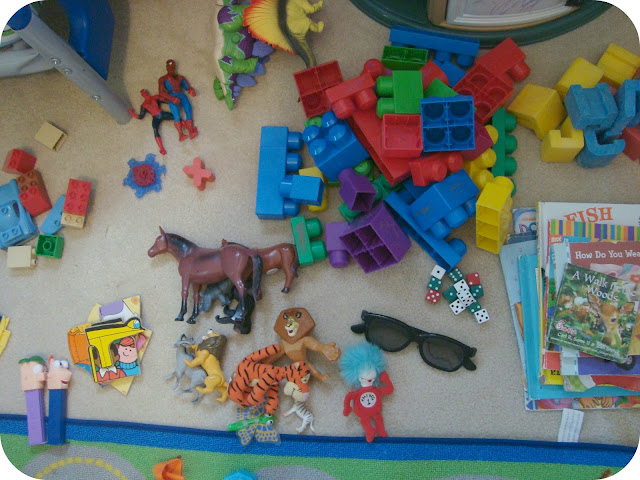 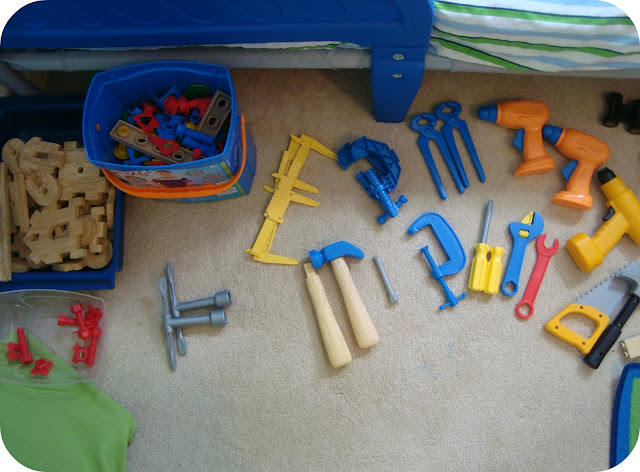 This is what the room looked like midway through. Scary huh? 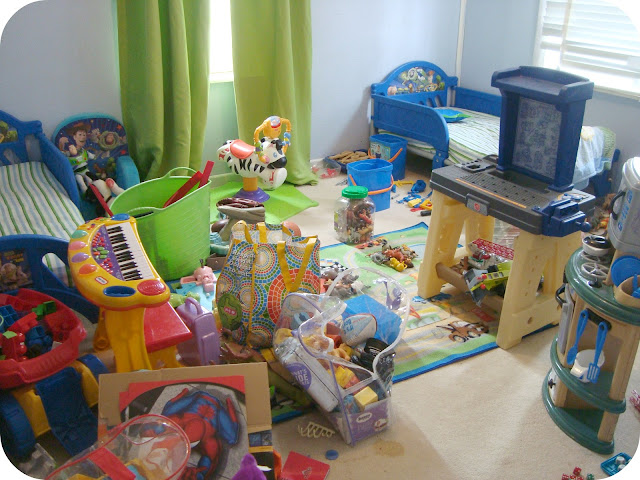 After I sorted all the toys, I could see how many spidermans they had, how many cars and so on. So that's when I started making piles for give away, sell, and put away for later. I made the baby his own little pile of babyish toys for when he starts playing with them. I also just threw away a bunch of stuff with missing pieces, broken things and stuff like that.

This is what I ended up with 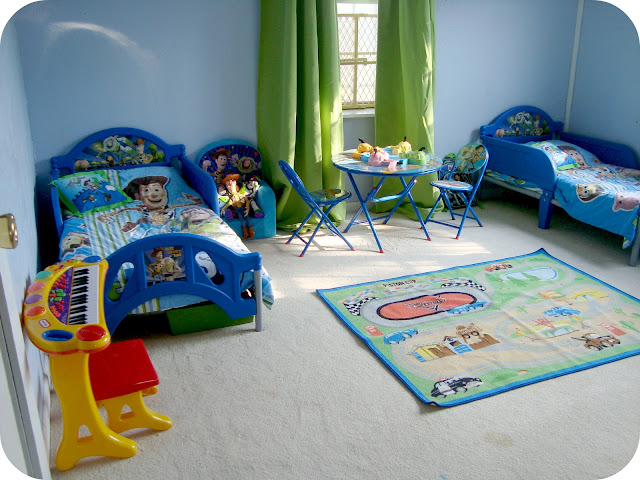 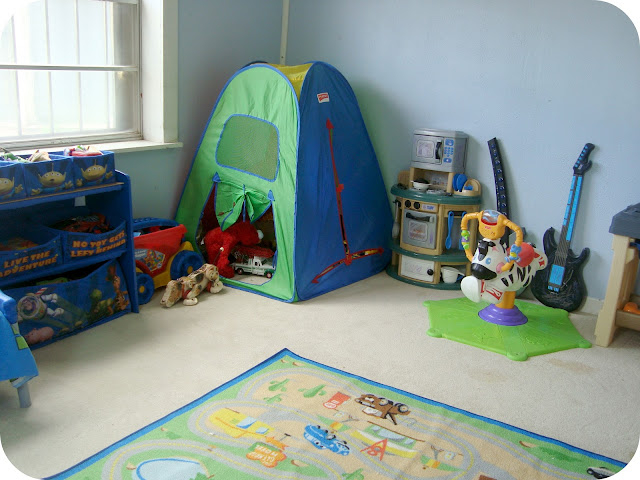 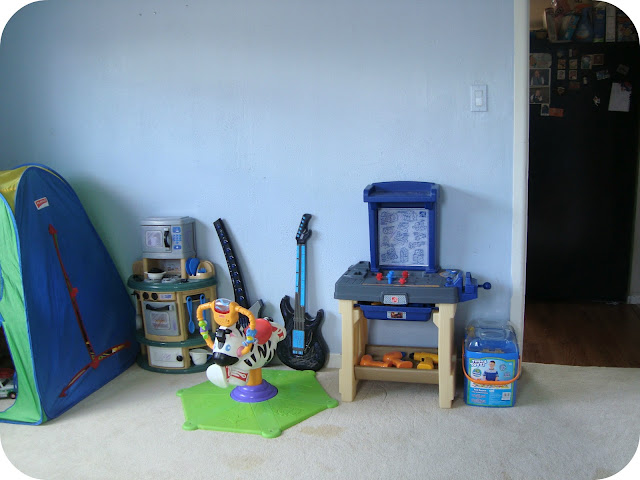 Much much better right?
Part two of this is going to be more detail about where all the toys went and a few of my plans for the room. I really haven't got to decorate it like I've wanted to yet, I've got some ideas for it tho.
I'm just so happy I can actually see the floor now! hehe
Posted by Allie - This Yellow House at 4:10 PM