My thoughts on: HGTV Design Star All Stars Episode with The Facts of Life Set

So I thought it would be fun to write another post about the show Design Star like I did a few weeks back here. *Please note this post has spoilers so if you aren't wanting to know who got voted off this week than don't read this.* And I also want to clarify that I'm not affiliated with this show in any way, I just really like the show.

So anyways now that I got all that clear! This season of HGTV's Design Star show is the All Stars. The four left in this episodes were Hilari from last season, Leslie from season 6, Tom from season 5 and Dan from season 4. I think it's been a lot of fun watching this season so far because I remember all the contestants from their seasons. If you can't already tell I really do love watching this show. 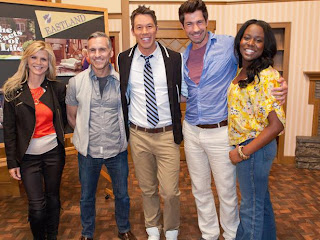 This week's challenge was to redo the set of "The Facts of Life". They were told to design the set as if the show were in 2012. I personally have only seen a couple episodes of the show because it was a little bit before my time. I was born in 1986. But even tho I haven't really watched the show much I know the theme song. I think it may be one everyone knows! 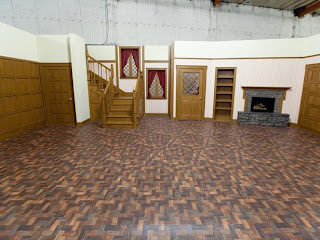 Hilari and Dan were on a team together. Their room was really modern and young. But also very, very, um VERY bright. Dan chose this neon green for painting the paneling and blue curtains. I was really not a fan. The green wall he chose was what got him voted off this week. 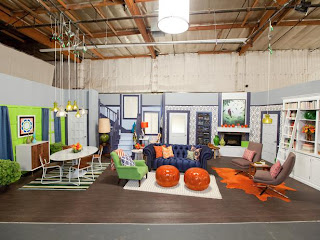 Some interesting parts of the room was the bookshelf. How fun is the ladder! I always love to see how people style their bookcases. Hilari did this and you can see all the books are facing the wrong direction with the inside pages showing. I've noticed this being done in a lot of places lately. It would be hard to find the book you want to read but it really does look interesting on the shelf like that. 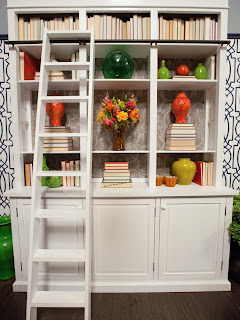 I also thought the poufs were neat too. On tv they looked so much redder to me than these pictures tho. Maybe my tv needs some color adjusting! I don't think I could get an orange pouf, but I really want a pouf in a more muted color for my house! 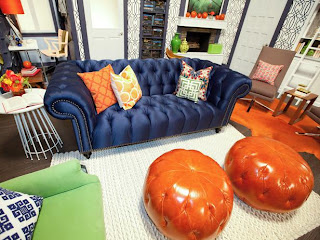 The other room was designed by Tom and Leslie. This was my favorite of the two. I love the blue and yellow color palette. 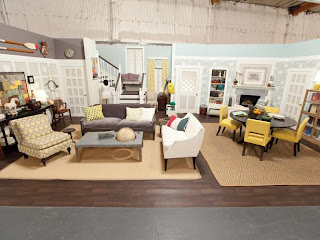 I really like the wallpaper Leslie chose for the room too. The judges didn't seem to like it because they said it would be hard to see on tv because it's so muted. But looking at it close I thought it was really pretty. 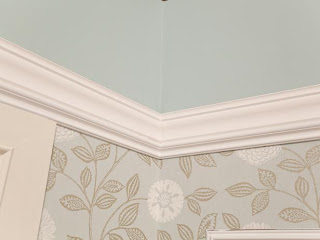 This coffee table was really interesting too. Quite a conversation piece. 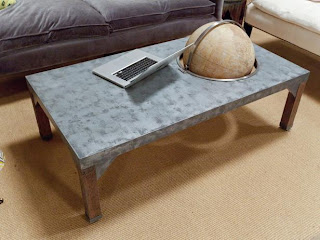 Tom did the painted paneling, and I really liked the colors a lot. I'm not really a fan of all the accessories here though. It feels a little cluttered to me. 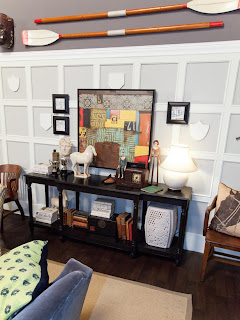 At the end of the show it came down to Hilari and Dan. The judges voted Dan off because of that neon crazy green wall. I'm not sure who I am rooting for this season. I'm leaning more towards Hilari. She has a really fun personality and decorating taste. I think a show with her would be fun to watch.

Oh and I also wanted to share something exciting. The season 3 winner Jennifer Bertrand is following me on twitter! Crazy right? It really made my day. I am so thrilled about that!

So did any of y'all watch this weeks show? I think I will now have The Facts of Life theme song stuck in my head all week! I would love to hear what you thought about this week's show...
Posted by Allie - This Yellow House at 8:42 AM