*Spoiler alert* Just in case you have HGTV's Design Star on your DVR and haven't watched it yet, don't read this! And I also just wanted to state, I have no affiliation with HGTV or the show. And I'm not getting paid at all to write this. I just really like the show!

(Source)
So honestly am I the only one who loves this show? This is my favorite show on tv right now. I love to make me some popcorn and sour cream to dip it in (yes I know I'm a freak!) and a nice iced drink and cuddle up with my husband to watch Design Star. His feelings about the show? Not quite the same as mine. In fact I know he will be happy when this season is over.

Is it weird I like to have someone watching the show with me? Yes I am one of those people that like to talk about everything that's happening during shows and movies. And I always try to predict who will win. So anywho because I love to share my thoughts on the show so much, I wanted to share what I thought about this week's episode with you!

(Source)
The final four were told to use a color inspiration they were given to design a condo. I'll start with my favorite which is Britany. She got the color yellow which I thought she did a really good job with. But, let's be honest, yellow is just an awesome color right? At least I think so. Maybe I'm a little biased because my blog's name is "This Yellow House". I love yellow. It's just a happy color. She did something really smart. Instead of painting the whole room yellow, she chose a really pretty blue color and put in bold yellow accents. Smart move girl! 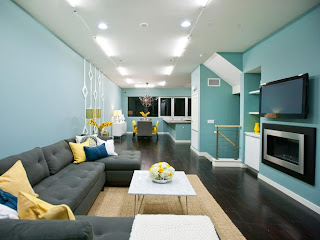 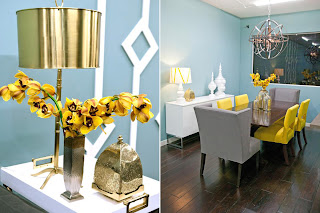 (Source)
I also thought the design she did on the wall was really pretty! 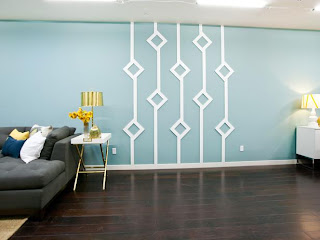 (Source)
The yellow accents reminded me of the challenge last week of the kitchens. Isn't this kitchen just gorgeous? It was Britany and Danielle that designed this room. I love the mix of old and new. That old buffet table is so pretty. And that chandelier is amazing. Oh and of course the pops of yellow here and there like the buttery yellow door. Ok I could stare at this kitchen forever. So much eye candy!

(Source)
Really the only thing I didn't care about Britany's room this week was that it felt a little bare in this area. Maybe it's just me? What do ya'll think? 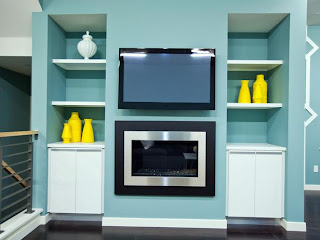 Back to last night's episode, Danielle got the color blue. I really think she could have made that room a lot better if she had not ran out of time. She got stuck on one thing and didn't quite finish the whole room. It was actually kind of sad to watch. I know it must have been really frustrating. One cool thing she did in her room were these photo mats she painted to add more color to the room. You can see the photo mats in the background of this picture. 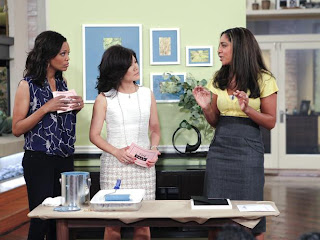 But, honestly overall I thought the room was so bare. 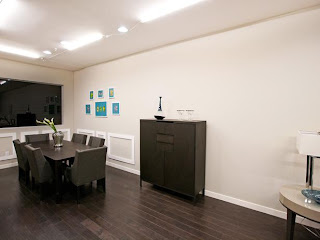 (Source)
Which is sad because she did a really good job in a past episode of a great room.

(Source)
Ok moving on to Mikel who got the color green as his inspiration. I'm sorry I just was not a fan. He has done good work in the past but this was not a great room for me. The furniture layout was really weird and he painted a green on the walls I wasn't really a fan of. Which is a shame because green can be such a pretty or fun color. I knew for sure he was going home when I saw his room. 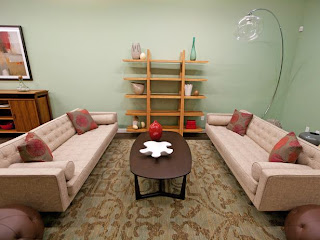 (Source)
I liked the other side of his room so much better. He also did a nice design on the wall. 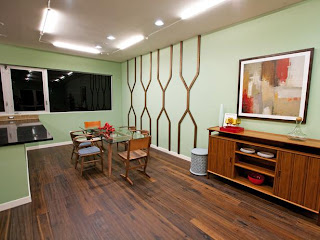 (Source)
And last but not least is Hilari. She seems like such a fun person! She said she has her own theme music in her head which I thought was really cute. She got the color red which really worried her because of last week's kitchen challenge. She picked out red counter-tops for their kitchen and the judges were not really fans of their color choices. So here she is doing red again. I thought she did a good job in just having pops of red in the room instead of painting a whole wall red which would have been too much. 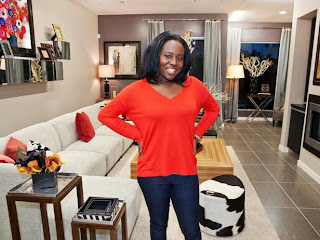 (Source)
I didn't really care for the red blanket she chose to hang in the room but that's just not my taste. 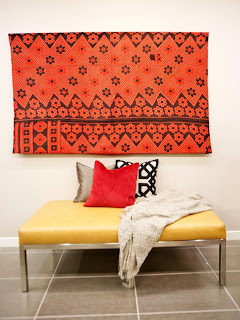 (Source)
I thought the branch sculpture thing was pretty cool, but then she overdid it a tad with a lot of little branches in other parts of the room. 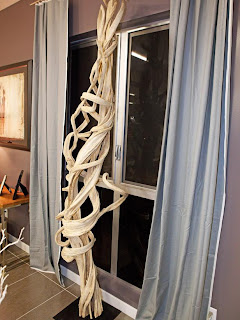 (Source)
I think Britnay's taste is my favorite but I'm pretty sure Danielle will win because the judges seem to like her the best. Although if Hilari had her own show I would definitely watch it too because she is so fun!

So I'm curious, what did ya'll like/dislike about the show? And who do you think will win?
Posted by Allie - This Yellow House at 7:33 AM